END_OF_DOCUMENT_TOKEN_TO_BE_REPLACED

Less well-known, but equally frightening, are the Conservative’s actions to be “Israel’s best friend” no matter what it does. That includes suppressing Canadians who criticize Israel’s illegal occupation of Palestine and those who support non-violent efforts – such as boycotts – to end the occupation. END_OF_DOCUMENT_TOKEN_TO_BE_REPLACED

END_OF_DOCUMENT_TOKEN_TO_BE_REPLACED 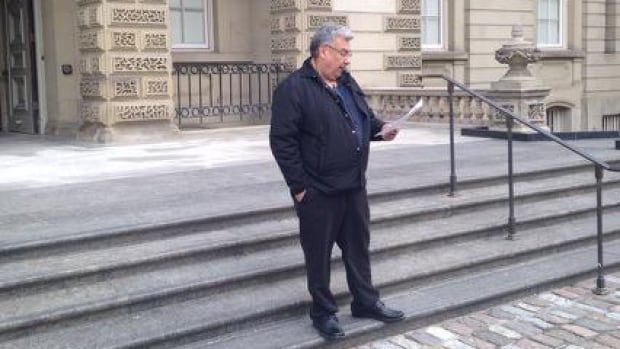 “Eventually if you’re categorized as a terrorist, you’re going to be
spending the rest of your life in prison and for myself, spending time
in jail for our action, I didn’t really appreciated that,” Morris told
CBC News. “It was humilating.” END_OF_DOCUMENT_TOKEN_TO_BE_REPLACED

Whatever other subjects the government intended to capture by expanding the hate speech laws to include “national origin,” it surely had a view to Israel, given that shortly after the passing of the Bill, the government issued an MOU with Israel in which it claims “that the selective targeting of Israel reflects the new face of anti-Semitism.” END_OF_DOCUMENT_TOKEN_TO_BE_REPLACED

But in all other respects the government has disregarded warnings of the Privacy Commissioner (and many others) about the reach and potentially ungovernable nature of this vast privacy-limiting power. Downstream sharing can still take place so long as it is “in accordance with law”, which include many exceptions to privacy. END_OF_DOCUMENT_TOKEN_TO_BE_REPLACED The association also wants to know why the spy service has shared intelligence with the petroleum industry, as well as copies of any notes, transcripts or recordings it has made available. END_OF_DOCUMENT_TOKEN_TO_BE_REPLACED

The BCLA Intellectual Freedom Committee began to take on projects broader than cases of individual defence. In conjunction with and under the leadership of Les Fowlie we participated in the 1988 fight against Bill C-54 (proposed amendments to the Criminal Code and the Customs Tariff regarding pornogaphy). As BC libraries distributed postcards, Toronto Public Library, in an heroic act of defiance, shut down most of its branches for a half day study session. END_OF_DOCUMENT_TOKEN_TO_BE_REPLACED

Most disapprove of tracking environmentalists, etc, lack of parliamentary oversight
When asked their approval of a number of specific provisions of bill C51, the majority disapprove of the Bill allowing security services to infiltrate and track environmentalists, First Nations and pipeline protesters (61%), and the lack of parliamentary oversight included in the bill (52%). In each of these cases, about one quarter approve (28% and 27%, respectively), and this is especially common in Alberta (32% and 34%, respectively) and among federal Conservatives (56% and 46%, respectively). END_OF_DOCUMENT_TOKEN_TO_BE_REPLACED 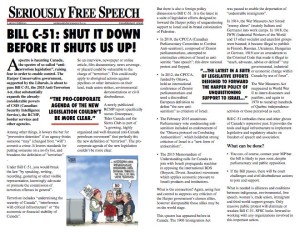 Terrorism includes “undermining the security of Canada”, “interference with critical infrastructure” or “the economic or financial stability of Canada”. END_OF_DOCUMENT_TOKEN_TO_BE_REPLACED