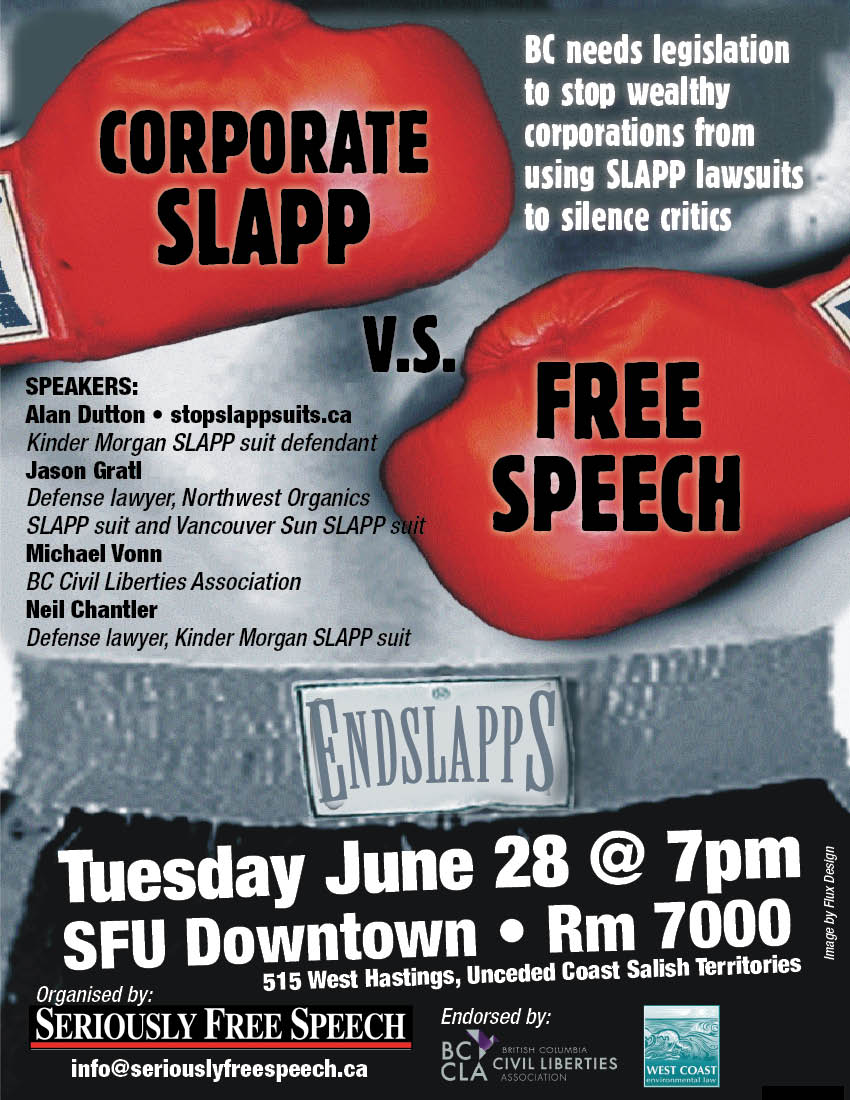 BC needs legislation to stop corporations from using SLAPP suits to silence critics. Recent BC SLAPP suits include the Kinder Morgan SLAPP suit against pipeline protesters on Burnaby Mountain, the Northwest Organics SLAPP suit against residents concerned about the environmental impact of a waste processing facility in the Botanie Valley, and the Vancouver Sun SLAPP suite against human rights activists who satirised the Sun’s anti-Palestinian reporting.

SLAPP suits (Strategic Litigation Against Public Participation) are used by large wealthy corporations against individuals and community-based groups. SLAPP suits are intended to censor, intimidate, and silence critics by burdening them with the cost of a legal defense until they abandon their criticism or opposition. SLAPP suits undermine and subvert democratic rights and the democratic process by muzzling free expression and limiting citizen participation in public affairs.

This forum will look at the need for anti-SLAPP legislation in BC through the lens of recent lawsuits that legal experts deemed SLAPP suits but the BC courts allowed to proceed. We will hear the perspective of both the defendants and the lawyers who attempted to have the lawsuits dismissed as SLAPP suits. We will also receive updates about the latest developments in these cases.

Kinder Morgan SLAPP suit
Trans Mountain Pipeline ULC, a subsidiary of the transnational oil company Kinder Morgan, was granted an injunction in October 2014 to stop rallies and demonstrations on Burnaby Mountain Conservation Land. Trans Mountain alleged damages associated with the rallies of $5.6 million and five people were named in the lawsuit along with Jane and John Doe and the Burnaby Residents Opposing Kinder Morgan (BROKE) – a community non-profit group. Alan Dutton was one of the five defendants and was sued personally and as a representative of the BROKE.
http://www.burnabynow.com/opinion/editorial/alan-dutton-s-case-raises-alarming-questions-1.1732379#sthash.O1Db7APW.743OQVzy.dpuf

Northwest Organics SLAPP suit
The lawsuit stems from the opposition by a number of residents to a Northwest Organics, Limited Partnership (aka Revolution Ranch) facility that processes organic waste on ranchland in the Botanie Valley, near Lytton BC. Northwest Organics alleged defamation on the part of four named residents, along with Jane and John Does, and a community non-profit group, the Botanie Valley Advisory Committee. Northwest Organics alleges that it was defamed by defendants’ statements, a environmental study of the impact of a waste facility on residents, wildlife and environment, and flyers mailed to local residents. http://www.vancouversun.com/Lytton+area+compost+operation+generates+odours+lawsuits/11635020/story.html

Anti-SLAPP legislation has been enacted in Quebec and Ontario as well as 38 US states and Australia on the grounds that SLAPP suits impede freedom of speech and public participation in the democratic process. BC was the first Canadian jurisdiction to enact anti-SLAPP legislation but it was repealed by the BC Liberals in 2001. Anti-SLAPP legislation was reintroduced a year ago in BC as a private members bill but has not made it to second reading due to lack of support from the Liberal government majority.

This entry was posted in Media, SFSC and tagged SFSC Event, SLAPP. Bookmark the permalink.