Whatever other subjects the government intended to capture by expanding the hate speech laws to include “national origin,” it surely had a view to Israel, given that shortly after the passing of the Bill, the government issued an MOU with Israel in which it claims “that the selective targeting of Israel reflects the new face of anti-Semitism.” END_OF_DOCUMENT_TOKEN_TO_BE_REPLACED But final approval never came. The Chronicle of Higher Education reports today that “Phyllis M. Wise, the campus’s chancellor, and Christophe Pierre, the University of Illinois system’s vice president for academic affairs, informed the job candidate, Steven G. Salaita, on Friday that they were effectively revoking a written offer of a tenured professorship made to him last year by refusing to submit it to the system’s Board of Trustees next month for confirmation.” END_OF_DOCUMENT_TOKEN_TO_BE_REPLACED 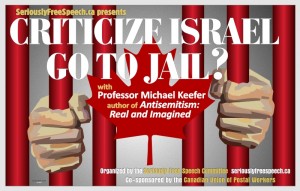 Joint Submission by SFSC and IJV-Canada to the Parliamentary Committee on Justice and Human Rights about Bill C-13, the supposed Anti-Cyberbullying Legisation.

The international campaign calling for boycott, divestment, and sanctions (BDS) against Israel, as a peaceful means of persuading that state to abandon its systematic violations of international law and its policies of apartheid dispossession, colonization, and blockade in the occupied Palestinian territories, has recently enjoyed a burgeoning number of successes.1

In early February 2014, The Economist noted that BDS “is turning mainstream,”2 and former Israeli Knesset Speaker Avraham Burg wrote in Haaretz that the “BDS movement is gaining momentum and is approaching the turning point […. at which] sanctions against Israel will become a fait accompli.”3

Israeli Prime Minister Benjamin Netanyahu made a point of indicating that he and his allies would respond vigorously to this trend. Some of the reports about a cabinet meeting where tactics were discussed revealed more about internecine divisions between those ministers invited to take part and those who were excluded than about the substance of the meeting.4 Yet although Israeli media indicated “that ‘the discussion was held in secret’, with an imposed ‘media blackout’,” one source that reported this fact was able to give a fairly precise sense of what went on behind closed doors:

Ideas apparently discussed by senior ministers included lawsuits “in European and North American courts against [pro-BDS] organizations” and “legal action against financial institutions that boycott settlements … [and complicit] Israeli companies”. There is also the possibility of “encouraging anti-boycott legislation in friendly capitals around the world, such as Washington, Ottawa and Canberra”, and “activat[ing] the pro-Israel lobby in the U.S.” for such a purpose.5

This kind of “lawfare,” as it is sometimes called, is nothing new (nor, one can add, is the notion, also discussed at this meeting, of bolstering surveillance of pro-BDS organizations by military intelligence, the Shin Bet Security Service, and the Mossad). It’s also evident that the pro-Israel lobby has been active in mobilizing politicians in the “friendly capitals” of Washington, Ottawa, and Canberra for many years.

Recent fruits of that labour have included, in Canberra, threats made in June 2013 by Julie Bishop, a senior member of Julia Gillard’s incoming Australian government, that “supporters of an academic boycott of Israel” would have their “access to public research funds summarily cut off.”6 In Washington, a bipartisan “Protect Academic Freedom Act” that would deny federal funding “to colleges and universities that participate in a boycott of Israeli academic institutions or scholars”7 has been brought before Congress.

But what of Canada, whose Prime Minister is Mr. Netanyahu’s most faithful friend?8

This essay will argue that revisions to the Canadian Criminal Code proposed by the Harper government contain wording that is designed to enable lawfare prosecutions of human rights activists in precisely the manner desired by Mr. Netanyahu and his associates.

END_OF_DOCUMENT_TOKEN_TO_BE_REPLACED

Comments Off on SFSC Article: Bill C-13 – Criminalizing Criticism of Israel in Canada

END_OF_DOCUMENT_TOKEN_TO_BE_REPLACED 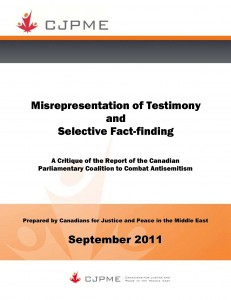 END_OF_DOCUMENT_TOKEN_TO_BE_REPLACED

Posted on September 21, 2011 by Seriously Free Speech Committee| Comments Off on Huffington Post: Canada Gets Tough on Anti-Semitism

“It also sets out a vibrant definition of anti-Semitism which, for the first time in history, links anti-Semitism to the denial of the right Jewish people have to their ancestral home land — the State of Israel. This, in fact, is what sets post-World War Two anti-Semitism apart from its historic roots. Today’s anti-Semitism is all about denial: denial of the legitimacy of Zionism as a Jewish movement to reclaim the land of Israel…”

END_OF_DOCUMENT_TOKEN_TO_BE_REPLACED

Comments Off on Huffington Post: Canada Gets Tough on Anti-Semitism

CIJA: Statement by The Centre for Israel and Jewish Affairs on the Signing of the Ottawa Protocol

Posted on September 19, 2011 by Seriously Free Speech Committee| Comments Off on CIJA: Statement by The Centre for Israel and Jewish Affairs on the Signing of the Ottawa Protocol

OTTAWA, Sept. 19, 2011  – The Centre for Israel and Jewish Affairs commends the Canadian Government on becoming the first country to officially sign the Ottawa Protocol; a report on anti-Semitism issued by the Inter-Parliamentary Coalition for Combating Anti-Semitism (ICCA) which met in Ottawa last November.

END_OF_DOCUMENT_TOKEN_TO_BE_REPLACED

Comments Off on CIJA: Statement by The Centre for Israel and Jewish Affairs on the Signing of the Ottawa Protocol

END_OF_DOCUMENT_TOKEN_TO_BE_REPLACED

Comments Off on CIM: Canada becomes first country to sign the Ottawa Protocol