UPDATE: Listen to an audio recording of David Sheen´s talk on Vancouver Coop Radio’s Redeye this Saturday, March 15th during the third hour, 11:00 AM – Noon (Pacific Daylight Time). Listeners should tune in at about 10:50. The talk will be trimmed down to fit time constraints.

People in Vancouver can tune into 100.5 FM; streaming audio is available at coopradio.org. A raw show archive will be available for a few months at the website. A proper podcast will be prepared a few days later and posted (permanently) at rabble.ca as well. 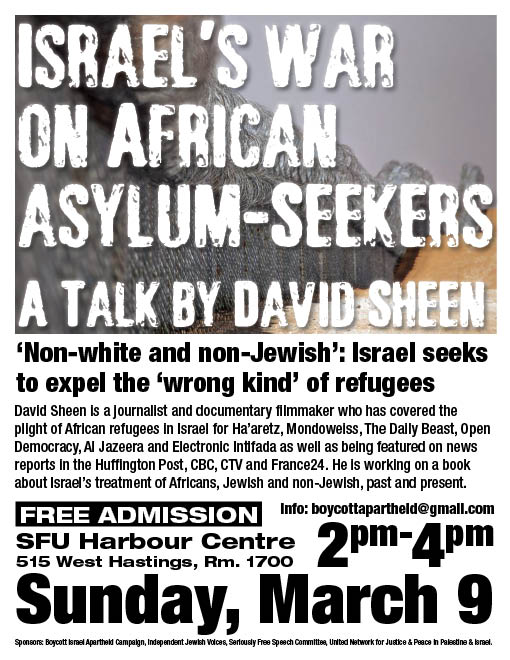 Since 2006, millions of African refugees have fled ethnic cleansing, political persecution and environmental collapse on the continent. More than 60,000 have sought refuge in Israel. The Israeli government let most of them in, hesitant to be seen as outright forcing refugees back to the horrors they fled from. However, members of the ruling parties have called them a “cancer” on the Jewish state.

To ensure that they would leave as soon as possible, the government has conducted a campaign to incite racial hatred against them, passed laws to criminalize them and is now rounding them up off the city streets and incarcerating them in what can be accurately described as a desert concentration camp. The government openly admits that its objective is to “make their lives miserable” so that they will give up and self-deport.

David Sheen is a journalist and documentary filmmaker who has covered the plight of African refugees in Israel for Ha’aretz, Mondoweiss, The Daily Beast, Open Democracy, Al Jazeera and the Electronic Intifada as well as being featured on news reports in the Huffington Post, CBC, CTV and France24. He currently lives in Dimona, the home of the African Hebrew Israelites, and is working on a book about Israel’s treatment of Africans, Jewish and non-Jewish, past and present.

Watch one of David Sheen’s short documentaries about the issue: