Canadian Charger: Is criticism of Israel or Zionism anti-Semitic?

Posted on November 28, 2011 by Seriously Free Speech Committee| Comments Off on Canadian Charger: Is criticism of Israel or Zionism anti-Semitic? 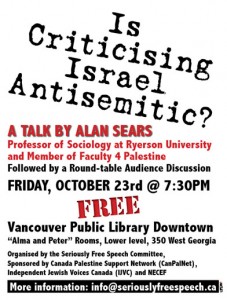 London Immigration lawyer Ed Corrigan said his libel case against Will Hector for calling him “one of the worst anti-Semites in Canada and an idiotic spammer,” in an email to the Law Union of Ontario (LUO) List forum, will be a precedent setting legal decision on the question: “is criticism of Israel or Zionism anti-Semitic?”

Mr. Corrigan is certified by the Law Society of Upper Canada as a Specialist in Citizenship and Immigration and Immigration and Refugee Protection.  He has had extensive experience representing Palestinian refugees, winning around 88 per cent of those refugee claims.

The Law Union of Ontario is an organization of lawyers and law students which is active on legal issues and human rights issues in the province of Ontario and across Canada. Mr. Corrigan participated in Israel-Palestinian debates through the LUO List forum.

Mr. Hector, who has practised law as a private lawyer, was a member of the LUO when he sent the email, as part of an ongoing debate about Israeli-Palestinian issues.

After reading Mr. Hector’s Statement of Defence, Mr. Corrigan said it is clear the defence intends to argue that anything other than trivial matters criticizing Israel is anti-Semitic.

“People throwing out the allegation of anti-Semitism to attack people critical of Israeli policies and defending Palestinian human rights is very damaging,” Mr. Corrigan said. “They don’t deal with the facts. They use ad hominem smear tactics to silence debate.”

He added that if this allegation of anti-Semitism is not refuted in a libel action it will stand against him in terms of his public and professional career and it will stifle debate.

“If not withdrawn by the defendant or deemed libelous and defamatory by the court the charge of anti-Semitism can be levelled at any person who criticizes Israel, or anyone who posts articles critical of Israel on a list serve, or who tries to publicly defend Palestinian human rights.”

In his statement of Defence, Mr. Hector cites a number of comments Mr. Corrigan has published as examples of what Mr. Hector considers anti-Semitic.

In one instance Mr. Hector cites Mr. Corrigan’s posting of an article published by the New York Times about an Israeli court case where an Arab who had consensual sex with an Israeli Jewish woman was convicted of a criminal offence for misrepresenting his name and that he was not Jewish.

In a second item, Mr. Hector attacks Mr. Corrigan’s defence of noted movie producer Steven Spielberg and award winning playwright Tony Kushner, both Jews, for at least acknowledging the Palestinian side of the issue in their movie Munich. That article was selected as a top article by the Alternative Press Review and republished by them. Mr. Corrigan said all of the information in that article is historically accurate and at minimum defensible even if it runs counter to the Zionist version of the narrative.

A third item in the Statement of Defense criticizes Mr. Corrigan for stating that the author of an article critical of Israel’s policies, or critical of Zionism, is Jewish, despite the fact that most articles written by Jews on the Israeli/Palestinian issue make reference to the writer’s Jewish identity if that is the case.

In an interview, Mr. Corrigan said a lot of Zionist policies are serious violations of Palestinians rights and the vast majority of people in the world would like to see a more balanced view of Palestinian issues.

“Not all Jews support the demolition of houses and targeted assassinations. In order to have real peace we must have justice.”

As well as having a leading Jewish academic, three prominent Jewish activists and another prominent academic who has published a book critiquing the so called “new anti-Semitism,” agreeing to act as witnesses on his behalf, Mr. Corrigan has 54 letters of support from the Jewish community, including statements from Noam Chomsky and Richard Falk, and 21 other letters from non-Jewish authors and activists.

“To refer to Edward Corrigan as “one of Canada’s most notorious anti-Semites” clearly constitutes libel and slander. His criticism of specific Israeli policies, especially those that are oppressive to Palestinians, and his opposition to Zionism are not only correct and justifiable but are within the context of the most positive and prophetic Jewish traditions. Numerous Jews, some of whom who are religious and some of whom who are secular, as well as many non-Jews have expressed and do express with abundant evidence the same criticisms of Israeli policies and Zionism as does Edward Corrigan. Many of the Jews who so criticize are Israeli Jews; they include leading Israeli academics and politicians.”

In his statement of Defence, Mr. Hector admits he sent the emails calling Mr. Corrigan “one of Canada’s worst anti-Semites and idiotic spammers” to the LUO email list, but he said the contents of his emails are fair comment on a matter of public debate; and Mr. Corrigan expressed criticism of Israel or cited with approval of others’ criticisms of Israel, which a reasonable person could opine to be anti-Semitic. Mr. Hector’s Statement of Defence also states that in the course of these debates, initiated by Mr. Corrigan, Mr. Hector expressed his opinions in good faith and without malice.

This entry was posted in Other Campaigns and tagged defamation. Bookmark the permalink.