Some Jewish groups have denounced the ads saying they are factually inaccurate, but Kates insists the series of maps showing Israeli encroachment are accurate and are based on statistics from the United Nations. END_OF_DOCUMENT_TOKEN_TO_BE_REPLACED

New maps could soon appear on TTC vehicles, and they won’t depict the subway line.

A pro-Palestinian group has approached the transit commission about buying space to put up ads similar to ones that incited controversy last week when they appeared on Vancouver’s TransLink system. END_OF_DOCUMENT_TOKEN_TO_BE_REPLACED

Vancouver Sun Letters to the Editor

TransLink was misguided in its approval of the Disappearing Palestine ads. First and foremost, is the timing. The Jewish New Year occurs in the first week of September this year, and then there is Yom Kippur, which is their most sacred day of the year.

The choice to buy ad space this time of the year strongly suggests intent by the Palestine Awareness Coalition to be provocative and insults those of the Jewish faith, as well as the legitimacy of the existence of the state of Israel. The ads should not have been permitted to proceed on this basis.

Second, is the issue of the content. Yes, the borders of Israel have altered since the UN plan of division in 1947. This is the result of a succession of wars. Wars change national boundaries and ownership of land, as seen in the redrawn map of Europe after the Second World War. END_OF_DOCUMENT_TOKEN_TO_BE_REPLACED

Comments Off on Vancouver Sun: Disappearing Palestine ads on public transit: offensive to Jewish faith or freedom of expression?

On TransLink buses (and one station) this week you might see an ad featuring four maps with progressively dwindling amounts of green on them. There are no exhortations. There isn’t a lot of context. But these are undoubtedly an intellectual freedom issue we should be aware of, because these ads are being challenged as the equivalent of homophobic sexist messages singling people out to feel unsafe.

Of course these maps are of Israel/Palestine.

The maps, created by the Palestine Awareness Coalition show the territory that Palestinians control and how it has shrunk over the 20th century, with a headline that reads “Disappearing Palestine.”

END_OF_DOCUMENT_TOKEN_TO_BE_REPLACED

Globe and Mail: Outrage over pro-Palestinian ads a case of shooting the messenger

Posted on August 31, 2013 by Seriously Free Speech Committee| Comments Off on Globe and Mail: Outrage over pro-Palestinian ads a case of shooting the messenger

When a pro-Palestinian organization launched a provocative ad campaign earlier this week, it didn’t take long for Jewish organizations across the country to register their outrage. But in a classic case of shoot the messenger, most of their anger was directed at TransLink – the authority that allowed images of shrinking Palestinian territory to be plastered on buses and the walls of transit stations. END_OF_DOCUMENT_TOKEN_TO_BE_REPLACED

Comments Off on Globe and Mail: Outrage over pro-Palestinian ads a case of shooting the messenger

The ads present four maps, corresponding to the Palestinian footprint in the Levant (a) in 1946, (b) under the 1947 UN Partition Plan, (c) from 1949-1967, and (d) in the modern day. The effect is to present Palestinians as a large ink blot gradually shrinking into nothingness. The text at the bottom declares “Five million Palestinians are classified as refugees by the UN.” It also indicates the name of the group that paid $15,000 for the ads’ four-week run, the “Palestinian Awareness Coalition.” END_OF_DOCUMENT_TOKEN_TO_BE_REPLACED

Comments Off on National Post: Bashing Israel on Vancouver buses isn’t a form of hate speech

Posted on August 29, 2013 by Seriously Free Speech Committee| Comments Off on National Post: If Vancouver’s Jewish groups don’t like pro-Palestinian bus ads, they should make their own

Jewish groups in Vancouver are demanding the city’s transit authority take down a series of controversial ads that show Palestinian borders disappearing into the State of Israel. The ads, sponsored by the Palestine Awareness Coalition, have been appearing on TransLink buses and in Vancouver’s SkyTrain station under the heading “Disappearing Palestine.” The posters use four maps over six decades to show how Palestine has been shrinking into the State of Israel. END_OF_DOCUMENT_TOKEN_TO_BE_REPLACED

Comments Off on National Post: If Vancouver’s Jewish groups don’t like pro-Palestinian bus ads, they should make their own

National Post: In transit ads, anything goes after top court ruled bus riders must ‘put up with controversy’

Posted on August 29, 2013 by Seriously Free Speech Committee| Comments Off on National Post: In transit ads, anything goes after top court ruled bus riders must ‘put up with controversy’

Public transit advertisements depicting an expanding Israeli territory are causing a fuss in Metro Vancouver, with some Jewish groups demanding the removal of posters from 15 city buses and a train station, and with pro-Palestinian organizations vowing to expand their “settlement and occupation” awareness campaign across Canada.

“We think it’s particularly important that people in Vancouver and other Canadian cities learn about what’s happening in Palestine now and what’s happened historically,” a spokeswoman for the Palestinian Awareness Coalition, the group responsible for the ad campaign, told the Canadian Press this week. END_OF_DOCUMENT_TOKEN_TO_BE_REPLACED

Comments Off on National Post: In transit ads, anything goes after top court ruled bus riders must ‘put up with controversy’ 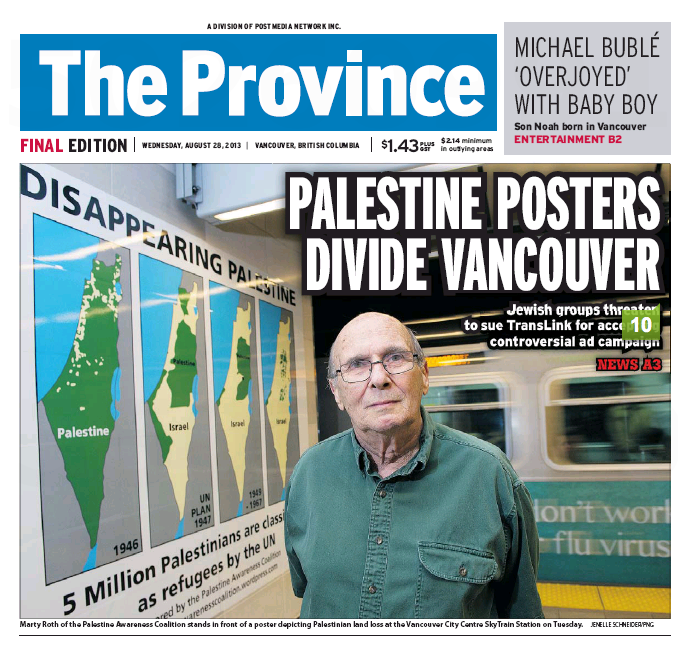 On Tuesday, a group called the Palestine Awareness Coalition announced the launch of 15 bus posters and a large mural in a central Vancouver SkyTrain station, that depict the territory of Palestine steadily shrinking into the state of Israel in a succession of dated maps.  END_OF_DOCUMENT_TOKEN_TO_BE_REPLACED