Posted on May 6, 2012 by Seriously Free Speech Committee| Comments Off on SFSC: Letter of Support for Gunter Grass

On behalf of the Seriously Free Speech Committee in Vancouver, Canada, we wish to extend our appreciation for your poem “What Must Be Said”.

There are many societies, and ours too is one of them, where public discussion of Israeli state policies and practices have been stifled by false accusations of anti-semitism, by media and government denunciations – if not outright exclusion — of critical comment. As a consequence, glaring realities, like Israel’s significant nuclear arsenal, and the German government’s direct contribution to this, never become part of reasoned public dialogue. END_OF_DOCUMENT_TOKEN_TO_BE_REPLACED

Comments Off on SFSC: Letter of Support for Gunter Grass 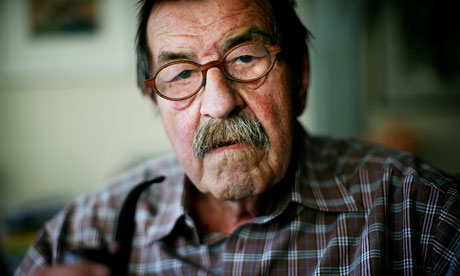 But do words warrant instituting a ban on a person?  END_OF_DOCUMENT_TOKEN_TO_BE_REPLACED

It’s rare that poems cause such anger and excitement. The only other case I can recall was Walt Whitman’s “Leaves of Grass” which once “awoke a perfect storm of derision and abuse”. That was a century and a half ago, but somehow Grass still awakens “derision and abuse”. But this time it’s Günter Grass, a Nobel Literature Prize winner, with his poem “What Must Be Said”. And the subject matter is war and peace.  END_OF_DOCUMENT_TOKEN_TO_BE_REPLACED

Comments Off on Berlin Bulletin: Germany – Aggrieved about Grass

It’s starting to dawn on me how important Gunter Grass’s poem is. The
naysayers predictably took their first loud shots against it (and him), that’s to be
expected. But the pushback has hardly begun and what remains unclear is the
overall reaction of the public both within German society and
internationally.

Commenter LeaNder alerted us to this prescient article in Spiegel Online by
influential German columnist and political analyst Jakob
Augstein, who nails it in his article Why We Need an Open Debate on Israel.

Gideon Levy has also weighed in: Israelis can be angry with Gunter Grass,
but they must listen to him.

While both journalists are critical of Grass, they capture what I believe
will be remembered as the lasting impact of his poem.  END_OF_DOCUMENT_TOKEN_TO_BE_REPLACED

Yishai condemns the German Nobel laureate for his controversial poem,published last week; Lieberman warns against how ‘small seeds of anti-Semitic hate can turn into a large fire that harms all of humanity.’  END_OF_DOCUMENT_TOKEN_TO_BE_REPLACED

SFSC: What must be said – Poem by Gunter Grass, translation by Michael Keefer & Nica Mintz

What must be said

Why have I kept silent, silent for too long
over what is openly played out
in war games at the end of which we
the survivors are at best footnotes.

It’s that claim of a right to first strike
against those who under a loudmouth’s thumb
are pushed into organized cheering—
a strike to snuff out the Iranian people
on suspicion that under his influence
an atom bomb’s being built.

But why do I forbid myself
to name that other land in which
for years—although kept secret—
a usable nuclear capability has grown
beyond all control, because
no scrutiny is allowed.

The universal silence around this fact,
under which my own silence lay,
I feel now as a heavy lie,
a strong constraint, which to dismiss
courts forceful punishment:
the verdict of “Antisemitism” is well known.

END_OF_DOCUMENT_TOKEN_TO_BE_REPLACED

The New York Times is treating the Gunter Grass poem as an artifact of his service in the Nazi SS as a teenager. “Story inadequate and tendentious by omission, without being exactly false,” writes a friend. “The headline calls it a poem ‘against Israel.’ It is not against Israel. It is against the sale of a German submarine to Israel which is capable of launching nuclear weapons. It speaks against ‘the burdensome lie’ of silence. Silence in general, about wrongs one knows of; and specifically German silence in the face of Israeli wrongs, because of the preemptive operation of self-censorship through an accurate awareness of guilt. It asks: why should Germany not speak the truth now, precisely because of its self-knowledge of the wrong of wars of aggression.”  END_OF_DOCUMENT_TOKEN_TO_BE_REPLACED

The German Nobel laureate and novelist Günter Grass has attacked Israel as a threat to an “already fragile world peace” in a poem published on Wednesday on the front page of the Süddeutsche Zeitung, a leading German daily based in Munich.

The poem “Was gesagt werden muss”, translated as “Somebody Must Say It”, criticises what it claims is western hypocrisy over Israel’s nuclear programme given the current speculation over whether the Jewish state will attack Iran to prevent it from building a nuclear bomb. A decision by the German government to sell a submarine capable of carrying nuclear warheads apparently provoked him to pick up his pen.  END_OF_DOCUMENT_TOKEN_TO_BE_REPLACED