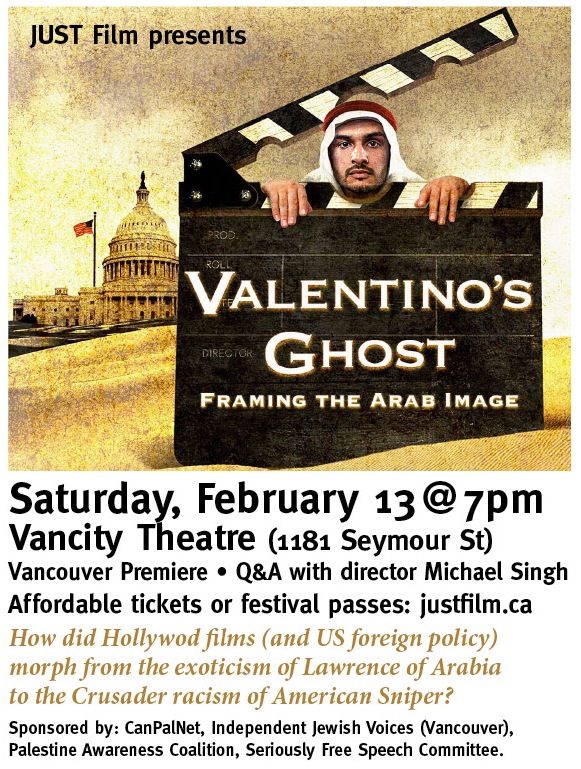 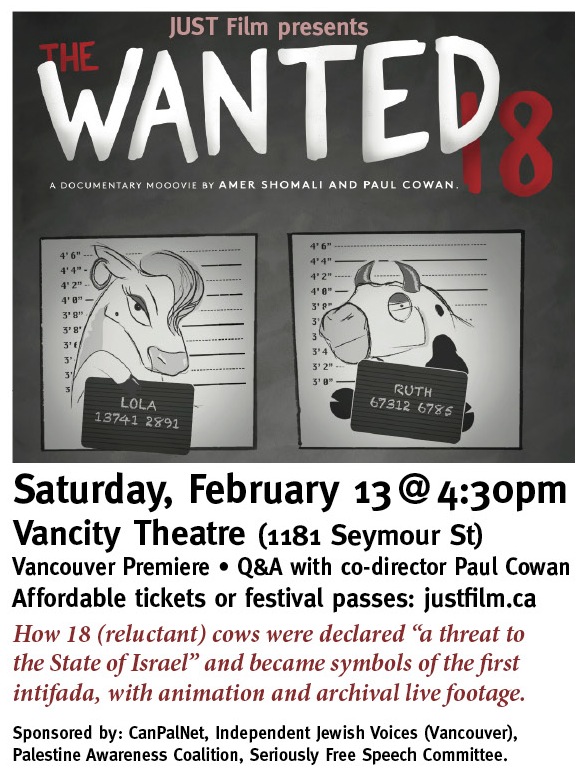 END_OF_DOCUMENT_TOKEN_TO_BE_REPLACED

Comments Off on SFSC Event: Stolen Land – First Nations, Palestinians at the Frontline of Resistance

END_OF_DOCUMENT_TOKEN_TO_BE_REPLACED

Less well-known, but equally frightening, are the Conservative’s actions to be “Israel’s best friend” no matter what it does. That includes suppressing Canadians who criticize Israel’s illegal occupation of Palestine and those who support non-violent efforts – such as boycotts – to end the occupation. END_OF_DOCUMENT_TOKEN_TO_BE_REPLACED

In his acceptance speech on May 21, Campbell, who helped found and run Vancouver FreeNet (now Vancouver Community Network), described the Harper government’s anti-terrorism bill (C-51) as the “most repressive piece of legislation introduced in this generation.” He warned that libraries could be put at risk by the bill’s broad definition of terrorist. END_OF_DOCUMENT_TOKEN_TO_BE_REPLACED

END_OF_DOCUMENT_TOKEN_TO_BE_REPLACED

Posted on March 25, 2015 by Seriously Free Speech Committee| Comments Off on SFSC at Just Film Fest 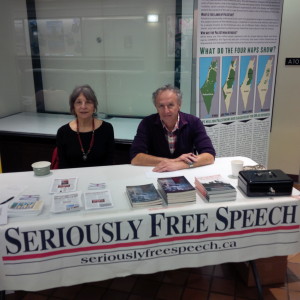 SFSC had table at the Just Film Festival at Langara College last weekend (both Saturday the 21st and Sunday the 22nd) and sponsored two films: “The Koch Brothers” on Saturday at noon, and “Vessel” (about abortion rights) Sunday at 1:30.

Films on Palestine/Israel at the festival included: The People and The Olive, Al Helm: MLK in Palestine and The Lab
http://justfilm.ca/films-topic-2014/palestine-israel/

Lots of people dropped by the table to see our leaflets and books.

Comments Off on SFSC at Just Film Fest

The BCLA Intellectual Freedom Committee began to take on projects broader than cases of individual defence. In conjunction with and under the leadership of Les Fowlie we participated in the 1988 fight against Bill C-54 (proposed amendments to the Criminal Code and the Customs Tariff regarding pornogaphy). As BC libraries distributed postcards, Toronto Public Library, in an heroic act of defiance, shut down most of its branches for a half day study session. END_OF_DOCUMENT_TOKEN_TO_BE_REPLACED

Terrorism includes “undermining the security of Canada”, “interference with critical infrastructure” or “the economic or financial stability of Canada”. END_OF_DOCUMENT_TOKEN_TO_BE_REPLACED

The Harper government’s Bill C-51, or Anti-Terrorism Act, has been in the public domain for over a month. Long enough for us to know that it subverts basic principles of constitutional law, assaults rights of free speech and free assembly, and is viciously anti-democratic.

An unprecedented torrent of criticism has been directed against this bill as the government rushes it through Parliament. This has included stern or at least sceptical editorials in all the major newspapers; an open letter, signed by four former Prime Ministers and five former Supreme Court judges, denouncing the bill for exposing Canadians to major violations of their rights; and another letter, signed by a hundred Canadian law professors, explaining the dangers it poses to justice and legality.

As its critics have shown, the bill isn’t really about terrorism: it’s about smearing other activities by association―and then suppressing them in ways that would formerly have been flagrantly illegal. The bill targets, among others, people who defend the treaty rights of First Nations, people who oppose tar sands, fracking, and bitumen-carrying pipelines as threats to health and the environment, and people who urge that international law be peacefully applied to ending Israel’s illegal occupation of Palestinian territories. (Members of this latter group include significant numbers of Canadian Jews.)

But the Anti-Terrorism Act is more mortally dangerous to Canadian democracy than even these indications would suggest. A central section of the act empowers CSIS agents to obtain judicial warrants―on mere suspicion, with no requirement for supporting evidence―that will allow them to supplement other disruptive actions against purported enemies of Harperland with acts that directly violate the Charter of Rights and Freedoms and other Canadian laws.
The only constraints placed on this legalized law-breaking are that CSIS agents shall not “(a) cause, intentionally or by criminal negligence, death or bodily harm to an individual; (b) wilfully attempt in any manner to obstruct, pervert or defeat the course of justice; or (c) violate the sexual integrity of an individual.”

The second of these prohibitions―occurring in the midst of a bill that seeks systematically to obstruct citizens in the exercise of their rights, pervert justice, and defeat democracy―might tempt one to believe that there is a satirist at work within the Department of Justice. (Note, however, that CSIS agents can obstruct, pervert and defeat to their hearts’ content, so long as they do so haphazardly, rather than “wilfully.”)
But the first and third clauses amount to an authorization of torture. END_OF_DOCUMENT_TOKEN_TO_BE_REPLACED