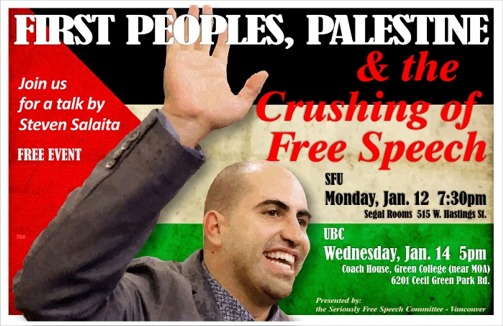 AT SFU: Monday, January 12, 7:30 PM in the Segal rooms at Harbour Centre, 515 Hastings Street.
AT UBC: Wednesday, January 14, 5 PM in the Coach House at Green College, 6201 Cecil Green Park Road (off Marine Drive, near MOA)
Free admission to both talks; Dr. Salaita’s books will be available at both.

FIRST PEOPLES, PALESTINE, AND THE CRUSHING OF FREE SPEECH

Professor Salaita is at the centre of an international protest against academic censorship. Author of six books and many articles, he was “unhired” from a tenured position in American Indian studies at the University of Illinois when donors pressured the university because of Salaita’s tweets on his personal Twitter account about the Gaza massacre this past summer. Because this action is widely recognized as part of a broad effort to silence voices for Palestinian rights and justice, and as one incident in the long history of colonial treatment of indigenous peoples, the case has attracted international attention.

This entry was posted in SFSC and tagged campus, Salaita, SFSC Event. Bookmark the permalink.