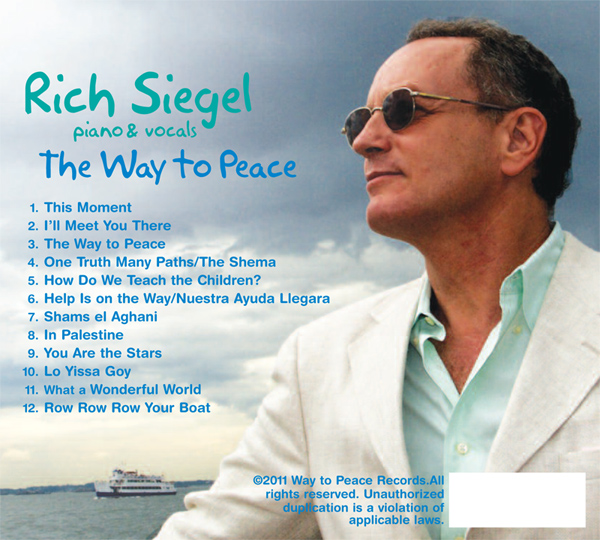 Some disturbing news: A very complimentary review of my new CD has been PULLED because of politics. The reviewer’s name is Brent Black, his website is criticaljazz.com and you can contact him at real.jazz@ymail.com (This email address is published on the website.)

Here’s what he posted on Facebook about his decision to pull the review (in lower case as he wrote it): “my humble apologies to my jewish friends for reviewing rich sigel (sic) an anti-zionist peace activist that supports the destruction of israel. had i know (sic) who he was and what he was all about i never would have given him 30 seconds of my time. his review is pulled and e mail blocked. again my apologies i stand with israel NEVER against her but firmly against her enemies.”

The claim that I support the destruction of Israel is pure libel. I have never made any statements advocating the destruction of Israel, or the destruction of anyone or anything. The irony here is that in his review Black makes it a point to separate his disagreement with my politics from his assessment of the music I have brought to the world with this new recording. (Read review below.) He has obviously flushed that integrity down the toilet with his libelous announcement and decision to pull the review.

(link to the CD http://palestineonlinestore.com/shop/the-way-to-peace-by-rich-siegel/ )

Rich Siegel “The Way to Peace”

Perhaps the greatest joy in writing about music and predominately jazz in particular would have to be taking the occasional sonic path less traveled. Had someone told me two years ago I would have been reviewing the work of an anti-Zionist peace activist, a request that this individual be drug tested would be the expected response from those few that travel in my inner circle.

The Way To Peace is not a political manifesto in the strictest sense of the word but instead I will allow Siegel’s words to speak for him:

‘I sought a marriage of spirituality and peace activism, combining my originals with some extraordinary cover material, notably by New York composer Kirk Nurock and Lebanese composer Ahmad Kaabour, as well as others.’

From a purely musical perspective, Siegel is a gifted instrumentalist with rich vocals that glide effortlessly along with his playing. http://www.criticaljazz.com/ is actually an outgrowth from some inspiration found in of all places – facebook. Having rather outspoken and often (not always) conservative views on the subject of the Palestinian state, I am long on record as encouraging artists to stay away from such incendiary topics as faith, politics and sexual orientation when it comes to social media. The reasoning for an artist to stay away from such potentially damaging topics is not to squash an opposing point of view or monopolize a public forum but from a practical standpoint of alienating a large segment of one’s audience.

The one piece of advice given to me by a former editor of separating the individual from the artist probably best rings true from this perspective. Rich Siegel is and what he sings about. For this reason alone, The Way To Peace is a stellar recording.

If an artist is to give of them self in a form of expression be it music, painting or sculpture then all you can ask for is an honest shared perspective. You can respect an opinion and disagree with it. To oversimplify Siegel’s music as that of the “peace movement” would be disingenuous at best. Instead Siegel presents us with an eloquently stated, musically pristine offering of himself and shares a piece of what is in his heart.

Isn’t that what art is all about?

This entry was posted in Media, Other Campaigns and tagged criticaljazz, printonline. Bookmark the permalink.