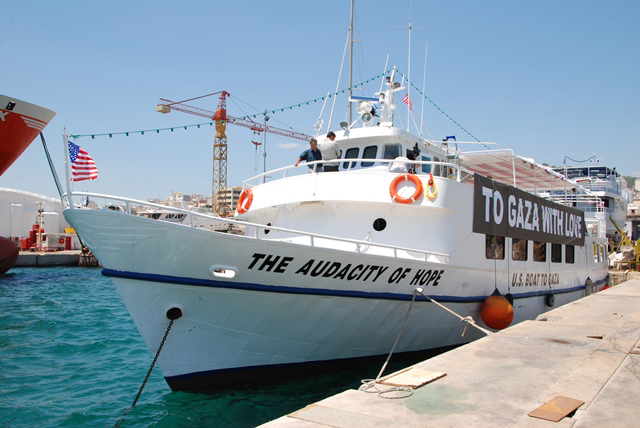 The Audacity of Hope is the name of the ship, operated by US Boat to Gaza (link) , on which Alice Walker (link), Hedy Epstein (link) and dozens of others attempted to break the illegal Israeli blockade of Gaza before being stopped by Greece (link) last summer.

The bill asserts, turning reality on its head, that “Recent past history has suggested that the sole intent of the flotillas is to provoke an Israeli military response in the international waters of the eastern Mediterranean Sea.

It also claims, amid a laundry list of other dubious recitations, that “Since the beginning of 2010, Israel has provided over 100,000 tons of aid to the people living in Gaza.”

In fact, Israel does not provide any “aid” to Palestinians. Rather, Israel allows limited quantities of aid supplied by the United Nations and other countries into Gaza according to arbitrary restrictions as part of its siege (link) .

Israel has deliberately restricted food supplies to the 1.6 million Palestinians in Gaza using “mathematical formulas (link) ” designed to keep the population on the edge of hunger without attracting too much international attention, as the Israeli human rights organization Gisha discovered from an examination of Israeli defense ministry documents. Claims of “terrorist ties” based on Israeli propaganda outfit

Reproducing unsubstianted Israeli propaganda and allegations, the bill accuses the Turkish humanitarian organization IHH (link), which was involved in earlier flotillas, of ties to terrorism:

The Central Intelligence Agency and the Department of the Treasury have determined that flotilla organizers Free Gaza and the Insan Hak ve Hurriyetleri ve Insani Yardim Vakfi (IHH), an Islamic nongovernmental organization (known in English as the Foundation for Human Rights and Freedoms and Humanitarian Relief), have known terrorist ties.

In 2010, IHH organized a flotilla that included the ship Mavi Marmara carrying 40 IHH members, including Fatima Mahmadi, Ken O’Keefe, Hassan Iynasi, Hussein Urosh, Ahmad Umimon, and others with known links to Al Qaeda, Hamas, and other terrorist organizations who were armed with 100 metal rods, 200 knives, 150 military self-defense vests, 50 wooden clubs, gas masks, and a telescopic sight for a gun.

But the bill provides no evidence to back up these sensational and propagandistic claims. IHH is in fact not designated as a “terrorist” organization by any US government agencies. The claims in the bill are not based on US government or intelligence reports, but appear to come directly from unsubstantiated claims published by an Israeli propaganda and advocacy outfit calling itself the Intelligence and Terrorism Information Center. This group is closely connected with Israel’s military and intelligence establishments, the main sources for sometimes laughable anti-flotilla incitement and propaganda (link).

The bill appears to be a transparent attempt to criminalize solidarity with Palestinians and opposition to US policy supporting Israel’s siege of Gaza. It would effectively further erode First Amendment rights in order to intimidate and suppress criticism of Israel. It demands,

Not later than six months after the date of the enactment of this Act, the Secretary of State shall submit to the Committee on Foreign Affairs of the House of Representatives and the Committee on Foreign Relations of the Senate a report on whether any support organization that participated in the planning or execution of the recent Gaza flotilla attempt should be designated as a foreign terrorist organization pursuant to section 219 of the Immigration and Nationality Act (8 U.S.C. 1189).

No concern for Americans

HR 3131 reads like a manifesto of the most extremist pro-Israel organizations. Fair enough, if that’s how members of Congress think they should be spending their time. But in addition to the bill’s utter disregard for facts and its dehumanizing contempt for Palestinians is the notable lack of any concern for US citizens and their lives, especially Furkan Dogan (link) an American teenager who was murdered execution-style by Israeli soldiers aboard the Mavi Marmara in May 2010.

The bill is currently in committee.

This entry was posted in Media, Other Campaigns and tagged Boat to Gaza, Government repression, International. Bookmark the permalink.