SFSC: Letter to VPL re Beyond the Palestinian Statehood Initiative

Posted on October 4, 2011 by Seriously Free Speech Committee| Comments Off on SFSC: Letter to VPL re Beyond the Palestinian Statehood Initiative 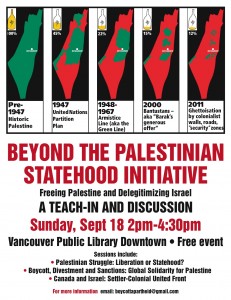 I am writing on behalf of the Seriously Free Speech Committee (SFSC) to express our concern regarding the letter that the Mayor and City Council received from Mr. Gordon Diamond dated Sept.14, 2011 and a letter that the Chief Librarian received from the Jewish Federation of Greater Vancouver to the Board regarding a program held in a rented room at VPL on September 18, 2011 entitled  Beyond the Palestinian Statehood Initiative – Freeing Palestine and Delegitimizing Israel.  We are also in receipt of a document wherein the Simon Wiesenthal Centre claims to have contacted both the City and the Chief Librarian regarding the same program.

First we would like to congratulate the VPL Board and staff for upholding the CLA Intellectual Freedom Statement and VPLs role as a public space for the discussion of ideas.

Unfortunately the comments received by the Chief Librarian are an attempt to shut down discussion by labelling it antisemtisemitic.  This strategy is increasngly used by Israel’s  supporters as its political postions and  history come under increased critical examination.  As one of many examples, the Simon Wiesenthal Centre recently played a prominent role in shutting down an exhibit of Palestinian children’s art in the Oakland area.

The SFSC would like an opportunity to address the VPL Board on the issues raised and on the worldwide campaign to shut down discussion of the Israel/Palestine conflict and the suppression of those who are critical of Israeli policies and support Palestinian human rights.

The SFSC was founded in Spring, 2008 to defend activists who were being sued by Canwest for publishing a parody of The Vancouver Sun and its pro-Israel slant.  Since then we have expanded out mandate to defend those critics of Israel who have been subject to the growing campaign of harassment and vilifictation.  We have been particularly active in exposing  attempts by the Canadian Parliamentary Committee to Combat Antisemitism to expand the definition of antisemitism and to criminalize or bureaucratically suffocate criticism of Israel.

This entry was posted in Other Campaigns, SFSC and tagged Attempted censorship at VPL, SFSC Letter. Bookmark the permalink.