Posted on October 13, 2011 by Seriously Free Speech Committee| Comments Off on Greek Association for Solidarity with the Palestinian People: Activists detained after interrupting Israeli ambassador’s speech

Tonight, members of the Intifada Association (Greek Association for Solidarity with the Palestinian People), supported by other solidarity activists, staged a peaceful protest raising the Palestinian flag during the first public speech of the Ambassador of the Israeli Apartheid in Greece, Arye Mekel. The Ambassador s speech was held in a conference organized by a host of pro-zionist entities (HEL.C.E.I.A., R.I.E.A.S., Defencenet). Many Greek parliamentarians attended the conference. 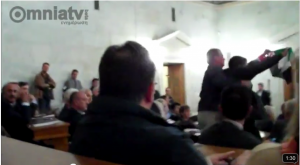 When the Israeli Ambassador stepped up on the podium, the members of the Intifada Association raised a Palestinian flag and expressed their solidarity to Palestinians with mottos such as “Free Palestine”, “Solidarity to Hunger Strikers”, “End torture in Israeli prisons”, and “Boycott The Israeli Apartheid”. Α group of undercover policemen intervened and violently expelled the two activists from the conference room, only to surrender them to a police unit outside the building where the conference was taking place.

There, the head of the police unit ordered the activists immediate arrest, repeatedly urging his officers to confiscate the Palestinian flag (an order which the officers hesitated to obey), without ever mentioning any specific charges that would justify the activists arrest. The two activists were subsequently taken to the State Protection Department of Athens General Police Headquarters, where they were stripped of their mobile phones and denied communication with their lawyers (whom luckily they had already notified).

The immediate response of solidarity people, from various political organizations, including other Greek pro-palestinian groups, coupled by the pressure of lawyers, succeeded in degrading the arrest into a routine detention at the Police Headquarters, in order for the activists to be identified (despite the fact that they had their ID s on them). Finally the two activists were released.

It is notable that it s the first time in such a protest, that the security men not only threw the protesters out of the room (as it had happened in 2008) but they also arrested (initially) or at least detained them (finally). In Palestine, raising a Palestinia flag is prohibited by the military order 938. Despite the fact that the implementation of this order has been mitigated after the Oslo agreements in 1993, now it seems that in 2011 it has started to be implemented also in Greece!

The 11/10 protest was just a symbolic act of solidarity to the Palestinian prisoners on hunger strike.

In the mean time, an agreement was announced, for a prisoners swap between more than 1000 Palestinian prisoners (from the more than 5000 in Israeli jails) and the one and only Israeli soldier of the occupation forces who s a prisoner of war.

We remind you that Intifada Association is organizing on the 20th of October, 7.30 p.m. at the National Technical University an open discussion: “Greek-Israeli alliance. Will we permit it? ”.  With the economist Leonidas Vatikiotis, Vaggelis Pissias from “Ship to Gaza – Greece” and the journalist Aris Hadjistefanou.

Freedom for all the Palestinian prisoners

Greek Association for Solidarity with the Palestinian People – INTIFADA

This entry was posted in Other Campaigns and tagged International. Bookmark the permalink.